The future of work – 4 important trends to take note of 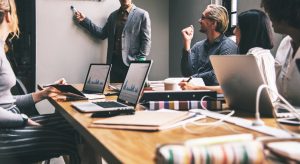 Artificial intelligence and automation have everyone talking. Optimists predict new work directions. Doom prophets on the other hand believe that robots will take over our jobs. One thing is certain – the world of work is experiencing unprecedented change.

In a world-wide LinkedIn survey of 5,000 professional human resources personnel and recruiting managers combined with behavioural data analysis, four trends emerged that will probably influence your career in the next few years.

The 4 trends and the % talent seekers in LinkedIn’s survey who consider these trends important, are:

The harsh reality of soft skills

The term “soft skills” in no way does justice to the complex combination of abilities that it describes: empathy, emotional intelligence, creativity, the ability to work together and to communicate, are but a few thereof – all skills that are becoming more important than ever before.

The fact that 80% of the participants in LinkedIn’s survey believe these skills are of growing importance for business success, proves this. It also corresponds with the observations of the World Economic Forum’s future of work report 2018.

During the recruitment process, the identification of soft skills presents employers with a challenge. Often the presence or lack thereof only becomes evident after a person has been appointed in a specific post. The unstructured manner of prior assessment during an interview is something that needs to change.

Instead, employers should formalise their approach to the evaluation of soft skills by, firstly, getting a clear idea of which skills they need. In a next step artificial intelligence can be used to analyse to what measure candidates possess those skills.

Not so long ago the possibility of being able to work from home was scarce and seen as a big benefit. Nowadays it is more common. “Workplace flexibility is becoming the norm,” says Jason Phillips, deputy-president of Digital HR and global head of Staff at Cisco. According to him, statistics show that more and more employees nowadays request flexibility.

Statistics also indicate that since 2016 there has been a 78% increase in jobs that mention workplace flexibility as benefit on LinkedIn. This can partially be ascribed to technology. Emails, instant messaging, conference calls and social media platforms make it easier for us to stay in contact with colleagues while location no longer matters so much. The concept of one work to which you dedicate your entire working career has changed and it no longer exists. Change and disruption have taught people to be more flexible.

If flexibility helps employers to attract and keep the best available people, it is an approach that immediately offers a clear business advantage. Costs involved in office location can also be cut if you allow people to work on a flexible basis. The technology giant Dell in this way saves an average of $ 12 million per year with its flexible work programme.

Harassment and bullying at work

Employers have a moral obligation (in some cases also a legal obligation) to protect their personnel against bullies and all forms of harassment. However, to have an anti-harassment policy succeed, it is necessary to promote a safe and supportive corporate culture.

In the past, those who were the targets of harassment all too often remained silent about it. Nowadays people are less hesitant to share incidents of harassment. In 2017, #MeToo became a viral phenomenon after a number of well-known and high-profile women expressed themselves against men who had harassed and assaulted them. This placed the matter firmly in the spotlight. Individuals and organisations who fail to put measures in place to stop harassment now run the risk of serious damage to their reputation.

According to the LinkedIn report, 71% of professional talent seekers worldwide agree that anti-harassment is an important trend for the future of employment. Prevention and the creation of supporting cultures require a combination of policies and actions. Improved diversity and inclusion at all levels can help to create an environment in which people feel safe to ask for help. Personnel must also constantly be reminded that they have access to help and will be supported.

Away with secrecy about salaries

The problem with secrecy is that although no-one knows what anyone else is being paid, there is a tendency to accept the worst about your own remuneration. This breeds suspicion, negativity and dissatisfaction. PayScale, an organisation that researches payments, asked 93 000 Americans how well they thought they were being paid in relation to the overall labour market. Two-thirds were wrong with their assessment and most of them believed they were being underpaid.

Fortunately, the tendency to secrecy is slowly coming to an end. According to LinkedIn, since 2014 there has been an increase in transparency about salaries being shared on its platform. The purpose of the transparency is to ensure that everyone receives equitable remuneration for the work they do. It also helps a lot to lessen the inequalities between men and women in the workplace.

LinkedIn’s survey as well as the World Economic Forum’s report about the future of work clearly indicate the evolution of skills that companies will demand. This is why experts are of the opinion that by 2022, 54% of all employees will need a re- and update of skills. Are you ready for it?