Your Job
Your Family
Your Career
Your Health
Your Money
You and the Law
Occupational Guilds
Solidarity Youth
Home › 2016-cv › Job hopping: Consider the pros and cons before you resign

Job hopping: Consider the pros and cons before you resign 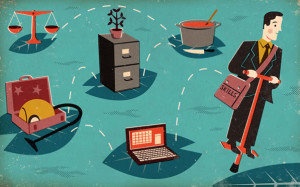 What is best: To switch jobs often or to stay with one job for longer? It depends on the context and you need to consider several factors.

Although job hopping has rightfully earned itself a bad connotation, there are nonetheless reasons why shorter periods at different employers are necessary and could serve well.

Why would you stay longer at one job?

“When an employer looks at CVs, the warning bells start tolling if an individual has switched jobs often,” says Anneri Leach, human resources manager at Solidarity. “Most employers spend a lot of time and money on personnel in the form of, for instance, training. Therefore, they would rather consider a person who will work for them for more than a year or two.

“There are many factors to look at when someone hops around like that, for instance, loyalty, self-motivation and perseverance.”

Leach says that an employer may think that you could have personal problems preventing you from staying with one employer for a long time. “It also negatively affects your own growth and development when you fail to stay with an organisation for long enough to get promoted and build up the necessary experience to specialise.

“Employers often look for someone who will be an asset to the company in the long run and will give preference to the candidate who shows ambition and has personal long-term goals for growth.”

In 2014, the recruitment company, Robert Half, did a study among 200 managers from British Companies. It found that prospective employers have a negative view of people who have had five jobs in ten years.

More than one in three (36%) of the respondents said that they are “highly likely” to view such candidates negatively, while 53% said they “may” feel that way. Only 11% indicated that they do not care how many jobs a person has had.

“Businesses look for people who will be committed to the organisation, can contribute to the company, and help it reach its short and long-term goals,” says Phil Sheridan, managing director of Robert Half in the United Kingdom (UK).

“Too much voluntary job hopping can be a red flag.”

“While there is no optimal period to stay with one job, the secret is to show progress. Your CV should show that you have mastered the role, provided value to your employer and earned recognition for your work.

“It can be in the form of promotions and/or additional job responsibility and usually takes around four or more years to achieve,” he says.

Why move around more often?

There is another side to this coin. Those who often switch jobs may be doing it for good reasons and because of circumstances beyond their control.

According to Leach, personnel leave their jobs for different reasons. The employer will want to know exactly why the employee changed jobs so quickly. “It is important to the employer to check because, sometimes, people truly have good and fair reasons for not staying with a job for long.

She says that it is beneficial to work for a shorter period in certain industries and jobs. “One example of this is a service centre. This type of environment usually does not have opportunities for growth but presents the opportunity to build up valuable experience. That would be a good reason why an individual with potential would not stay in such a position for long.”

“A further benefit is exposure and experience in different companies and in different fields that could go on your CV.”

According to Sheridan, the economy was very fickle over the last few years. Employers will understand that candidates are sometimes able to stay in certain positions for only a limited amount of time.

In the study by the staffing firm, RecruitiFi, 55% of the respondents , indicated that job hopping did not have a negative impact on their careers.

Ryan Kahn, a career counsellor and the founder of the staffing agency, Hired Group, advocates multiple jobs. “It is something people should be doing during their career because it diversifies their working environments and allows them to discover what their preferences are.”

“In addition, it can help you to obtain knowledge about a specific area of specialisation – like technology – while you are also building your professional network.”

There is a wide and still-growing gap between older and younger generations’ views in this regard. In a study by Payscale.com, it was found that half of the Baby Boomer respondents (born between 1946 and 1964) feel you should stay in one position for five years or longer. This number is only 13% among the Millennial generation (born between 1980 and 2000).

Millennial workers have lower expectations of their employers and work in fast-changing industries like the IT sector. This explains why they do not wish to stay in one position for very long. Their circumstances – no families or mortgages – further allow them to switch jobs faster and to move around.

Sommerfield, Jessica .s.j. “How often should you switch jobs? What to consider before quitting.” Moneyning. http://moneyning.com/career/how-often-should-you-switch-jobs-what-to-consider-before-quitting/.