How to merge exercise into your day at the office 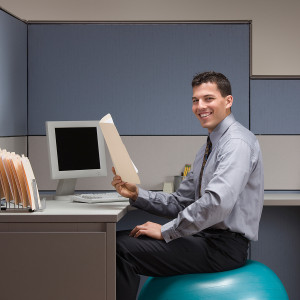 A sedentary lifestyle is the unfortunate by-product of today’s corporate and technology-driven world. Sitting has become the most common activity of the day. We commute by car to our office jobs, we are deskbound in front of our computers for hours on end, we are seated while traveling home and, last but not least, we sit in front of the television (while eating dinner!) before going to bed.

In a perfect world, we’d all have at least an hour a day to devote to our physical fitness, but in the real world twenty-four hours do not seem like nearly enough time to fit in work, school and family, let alone exercise! Being physically active is easier than you may think. Experiment with the following clever ways of sneaking a workout into your busy schedule:

Utilise your lunch hour to de-stress and revive. Pushing through an eight-hour day without a proper rest will ultimately lead to a decrease in productivity and more fatigue. Use the first 30 minutes of your break time to do some kind of exercise: an express spinning class, a few laps in the pool or a brisk walk around the block. Your office may have a gym, you may have access to a nearby swimming pool or even to squash courts. Be sure to also allocate time for a healthy lunch – away from your desk!

Our offices are often set up to encourage sitting. Spaces are designed with an implicit request to be seated while working. However, researchers at Washington University in St Louis report that groups working together on a project while standing are measurably more engaged and less territorial than while seated.

Consider making a change to the layout of your office area: furnish the conference room so as to support standing meetings, or offer Swiss balls instead of chairs. Equip a spot in your office to facilitate some quick core-strengthening repetitions; set yourself up for success and keep dumbbells or exercise tubing at your desk.

Bypass the invitation to sit down

Instead of habitually sitting down while reviewing work assignments, discuss project ideas with colleagues while taking a walk. Stand while talking on the telephone. Walk over to co-workers’ desks instead of sending emails. Take the stairs instead of the lifts. Come on, don’t just stand there! Walk up the escalator rather than just passively pausing until you reach the second floor.

Becoming a morning exerciser means that you cross off your workout from your to-do list first thing. Can’t quite get yourself out of bed that early? Wear your workout clothes to bed and get your sweat on as soon as you wake up.

Studies have shown a marked correlation between regular activity and an increase in productivity. An exercise routine raises your daily energy in the short term and can even increase the number of brain cells you develop  over the long term!

To obtain these benefits, you don’t have to sweat up a storm: research has proved that even low-intensity exercise leads to noticeably less fatigue and an increase in efficiency.

Exercise also has an immediate effect on your mood. Getting active causes your body to release brain chemicals that reduce the discomfort of exertion and provide a feeling of well-being. With higher energy levels and a positive mood, it goes without saying that you’ll be much more productive during your business day. What are you waiting for? Get moving!

How Exercising Helps You Get More Done

A randomized controlled trial of the effect of aerobic exercise training on feelings of energy and fatigue in sedentary young adults with persistent fatigue.

10 Ways to Sneak In a Workout

Get Up, Stand Up: The Effects of a Non-Sedentary Workspace on Information Elaboration and Group Performance

Get active your way