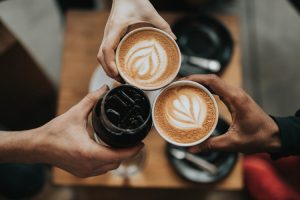 The most unusual team builder ever was recently discovered by researchers. It is that dark, bitter brew that makes meetings a whole lot sweeter ─ coffee. A new study by the University of California has revealed how coffee affects group dynamics:

It was found that team members who drank more coffee, gave more positive feedback on the group’s job performance and were more focused on the subject. More people under the influence of caffeine took part in a group set-up and were also more focused on the subject than those without caffeine. This can be ascribed to the fact that caffeine makes the brain more keen and clear. It is being speculated that it leads to a more positive disposition.

It helps team members to focus and increases memory functions

However, caffeine does more than just stimulate positive feelings. The analysis of the group discussions at the end of the study showed that those who used caffeine were more inclined to participate in group discussions and to focus on the subject under discussion ─ what they had to say was also more relevant. Another study confirmed that low doses of caffeine could have a beneficial effect on attention and focus.

It is always a problem to get team members talking at group discussions, but now there is hope. It was found that when colleagues had coffee together beforehand, they joined in more freely in a group context. And regardless of the fact that a contentious subject was discussed, it did not cause friction in the group. Those who took caffeine also showed greater willingness to cooperate with the group again. The results confirm that those who drank coffee evaluated themselves and other group members more positively. “Apparently coffee made the group discussions easier and more pleasant,” says Amit Singh, co-author of the California University study. “Even though they talked more and even though not everybody agreed all the time, they still continued to cooperate in the group.”

Other known benefits of coffee

Apart from being a tasty beverage, coffee is a stimulant that gives your central nervous system a jump-start, increases your productivity and keeps you alert. “We think that when people are more alert, they see themselves and the other members of the group as people who make a bigger contribution, and this contributes to their more positive attitude,” according to Singh.

Working in stressful situations for extended periods is never a good thing. Fortunately the oils in coffee, such as kahweol and cafestol, are unique neurological anti-inflammatory agents that can fight stress and therefore can benefit employees in the long term.

Your body uses energy when the energy is available for use. An increased coffee intake will increase the availability of energy in your body. Oxygen intake and lung functions are also increased, which results in metabolic efficiency.

It is not necessarily only the caffeine in coffee that makes a person more creative. Coffee breaks are social occasions during which social interaction with coworkers often leads to the exchange of creative ideas.

From time to time all of us experience extra-long workdays when we simply cannot leave the office before a particular job has been done. These long hours behind a desk can be debilitating. During stressful times like these coffee can offer a measure of relief because it is also a pain moderator.

Because coffee increases metabolic activity, it will help to give employees’ metabolism a boost ─ even where they sit behind their desks.

A study by the National Institute of Health found that employees who drink four or more cups of coffee during the course of the day ─ about twice the recommended daily dose ─ are about 10% less inclined to become depressed than those who never drink coffee. Taking time out from your work schedule for a short coffee break will contribute to your happiness. It will also automatically lessen the burn-out that faces you everyday with your heavy work load, deadlines and the numerous stressful situations.

From the study we can infer that employees who have coffee together deliver higher-quality arguments when they work in groups and, in addition, put forward more arguments. The findings show that caffeine increases a group’s focus and urges each person on to increased participation in discussions. Even more important is the fact that those who drank coffee before a group task evaluated their own and the group’s performance more positively than those who did not drink coffee.

It would therefore appear that the key to good teamwork is indeed a large cup of quality coffee.