Your Job
Your Family
Your Career
Your Health
Your Money
You and the Law
Occupational Guilds
Solidarity Youth
Home › 2016-union › Is your boss insecure? Find out

Is your boss insecure? Find out 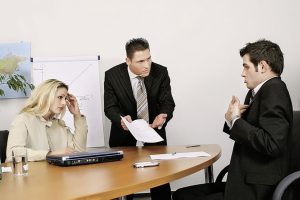 Conventional wisdom dictates that self-confident people with a heightened sense of authority become managers because they have to lead people.

Unfortunately this is not always the case. Most of us have or will come up against managers who are insecure in themselves. They have low self-confidence (even if they show it in the weirdest ways!) and they distrust their colleagues and especially the personnel in the teams they have to manage and lead.

This insecurity can have many causes, such as an inherent lack of self-confidence and competence or job demands and roles imposed on them too early.

Whatever the cause, insecurity in managers can have a destructive influence on the morale and motivation of their colleagues. It could lead to, inter alia, poor job performance, decreasing productivity, a fast personnel turnover and lower outputs.

How do you identify such a manager?

Managers who are unsure of themselves will reveal it sooner or later. The behavioural patterns of such managers have many characteristics. In general they are people who fear other people’s feedback and criticism because it could make their own proposals and ideas look bad. They therefore do not welcome inputs.

A survey by a big multinational oil company obtained the opinions of 41 managers and 148 employees. They found that managers who felt incompetent were much less inclined to ask or accept inputs from employees.

Lottie O’Connor wrote in the British daily The Guardian that such managers are always overcritical and regard each finished job with suspicion. They like a us-against-them structure and spend more time with senior personnel while acting dismissively towards junior personnel.

They also use strategy to exclude those they do not like or do not trust.

Katrina Joseski, an Australian business woman and blogger, says they will, for example, only invite certain people to important meetings that everybody has to attend and only involve confidants in certain discussions. Also, they never mentor you to become a better worker, they never promote you and always let you feel that you’re not doing enough (even though you’re overperforming). They find it difficult to praise good work.

Heather Hettiarachchi, a lawyer specialising in labour law and human resources, also enumerates quite a number of related characteristics of insecure managers. For instance, they are perfectionists who exaggerate everybody else’s mistakes but never mention their own mistakes. They are micromanagers who constantly undermine other people’s work. They are also bullies, abuse their power and assume credit for the team’s successes but blame the failures on other people.

How do you handle an insecure manager?

It takes courage to work with such people, but there are ways for you as an employee to manage the situation.

First you have to lay down certain boundaries. If you keep on answering emails over weekends and say yes to excessive work, you confirm that his or her behaviour is normal. Be courteous but firm about not communicating and working at certain times.

Dr Surya Ganduri, a business and leadership expert, says any behaviour that lets them feel insecure should definitely be avoided. Also be on the lookout for opportunities to highlight their achievements, good decisions and advice, as well as positive behaviour. This will make them feel secure.

He also says that regular negative group discussions about the manager concerned should rather be avoided. Such criticism and frustration have a dogged tendency to reach the ears of such people.

Ganduri further says that one should sacrifice something of oneself by giving thanks, giving support and sharing praise.

Katrina Joseski, 10 November 2013, “Insecure managers – What yo you do?” Corporate Zoo, https://www.corporatezoo.com.au/insecure-managers/.